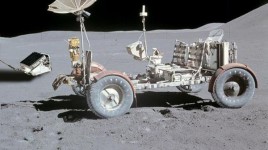 NASA has drafed guidelines to protect the Apollo 11 and Apollo 17 landing sites, listing them as off-limits, and including close proximity limits for ground-travel and no-fly zones to avoid spraying rocket exhaust or dust onto aging but historic equipment.

Robert Kelso, NASA’s director of lunar commercial services at Johnson Space Center in Houston, has taken a hard look at future revisits to the Apollo sites and how to protect U.S. government artifacts on the moon.

Kelso has carved out a set of guidelines intended to safeguard the historic and scientific value of more than three dozen “heritage sites” on the lunar surface.

The report, which was released on July 20, is titled “NASA’s Recommendations to Space-Faring Entities: How to Protect and Preserve the Historic and Scientific Value of U.S. Government Lunar Artifacts.”

A greater urgency for guidelines has been sparked by the Google Lunar X Prize’s offer of $20 million to any private team that lands a robotic rover on the moon’s surface. An additional $4 million has been offered for any team that snaps pictures of artifacts near or at the Apollo landing sites.

Key question
For Kelso, a key question is: “As the small commercial landers make preparations for possible visits to these historic sites, how do we protect these culturally significant sites from damage so that we can inspect them historically and scientifically?”

The recommendations listed by NASA are intended to apply to U.S. government artifacts on the lunar surface, such as:

Keep-out zones
Beth O’Leary, an anthropology professor at New Mexico State University said that the NASA guidelines create a series of keep-out zones and boundaries around the historic artifacts and features at all Apollo sites. Apollo 11 and Apollo 17 are acknowledged as having special historical and cultural significance, she said.

Those two locales are treated as unique by prohibiting visits to any part of these sites, and all future visiting vehicles would remain beyond the “artifact boundaries” of each entire site. “This provides a robust zone of protection around these two sites,” O’Leary said.

High heritage value
“For me, the NASA document represents a giant leap for lunar historic preservation,” O’Leary explained. “NASA references its ownership of its lunar hardware and the need for protecting what it calls ‘witness plates’ or ‘lunar assets’ — those significant artifacts it created in the past that are now on the moon. This is a critical first step and many more have to follow, but for the first time NASA formally recognizes the heritage value of Apollo 11 and other extraordinary lunar sites.”

“Importantly, it recognizes that future missions can disturb or change the earlier lunar sites in ways that scientific and historic information can be lost,” O’Leary said. Also, some of the sites are still active and continue to provide data — such as Apollo retro-reflectors used to measure the distance between the Earth and moon via laser ranging.

“It was time for a preservation strategy,” O’Leary said.