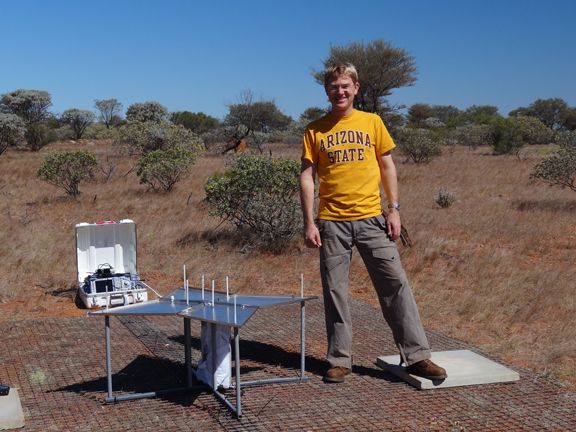 NLSI’s LUNAR Co-I Judd Bowman (ASU) was awarded the Roman Technology Fellowship by NASA HQ– a prestigious new award for early-career researchers. He will be one of three Astrophysics Roman Technology Fellows. The technology that he is pursuing is for a wideband radio receiver that has been proposed for use on the Dark Ages Radio Explorer (DARE) mission. The award will support Bowman and a postdoc for a one-year concept study, with the opportunity to continue on for a three-year instrument development program.

Last fall, NASA established the Roman Technology Fellowship program to foster technologies that advance scientific investigations in the origin and physics of the universe and future exoplanet exploration. The fellowship is named after Nancy Grace Roman, a distinguished American astronomer who was instrumental in establishing the new era of space-based astronomical instrumentation.

This fellowship is well-suited to Bowman’s research interests, which focus on the development of technologies to enable observational probes of Cosmic Dawn, the period when the first stars, galaxies, and black holes are believed to have formed only a few hundred million years after the Big Bang.

“Learning how and when stars and galaxies first formed in the early Universe is central to understanding our place in the Universe today, yet it is very challenging. The first galaxies will be very difficult to see with telescopes so we are trying a different approach,” explains Bowman.

“Low-frequency radio observation of the redshifted 21 cm line of neutral hydrogen is a promising technique to study the gas around the first galaxies, but we need to build radio receivers that we can calibrate 100 times better the best radio receiver used by astronomers today. That is a difficult task! We have only just begun to attempt it,” says Bowman. “The Roman Technology Fellowship will hopefully give us the jump start we need to make this technology a reality.”

Bowman and collaborators have already designed a prototype and will be traveling to Australia over spring break to test it. Stay current on the latest developments by reading posts at: https://asuexplorers.wordpress.com

“This project very much epitomizes what SESE stands for – the melding of science and technology to promote exploration of our Universe and environment. We are pushing technological limits in ways that will likely benefit earth, atmospheric, and planetary science, as well as astronomy. In order to even get to this point, we’ve had to revisit and extend core equations used in electrical engineering that have been well established for over 30 years,” says Bowman.

The receiver Bowman and his collaborators will develop is part of a NASA mission concept called DARE (Dark Ages Radio Explorer) that would orbit the Moon, using the Moon as a shield to block disruptive transmissions, such as FM radio and TV stations, originating from the earth.

“We will work closely with our collaborators on DARE at JPL, University of Colorado, and the National Radio Astronomy Observatory. In particular, this fellowship will help to strengthen ties between ASU and JPL and provide opportunities for students to visit JPL and JPL scientists to come to ASU to work with students in our lab here,” says Bowman.

Bowman is an assistant professor in the School of Earth and Space Exploration at Arizona State University. He is an interested in the formation of structure in the early Universe, including the first stars, galaxies, and black holes. He is principal investigator of EDGES, a ground-based pathfinder for the DARE mission concept, and is project scientist for the Murchison Widefield Array. Bowman also co-leads the DARE Calibration and Instrument Validation team and is a co-investigator of NLSI’s Lunar University Network for Astrophysics Research (LUNAR) Team.