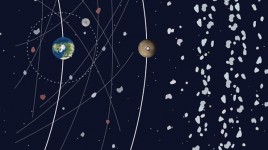 A team of NLSI researchers have discovered that debris that caused a “lunar cataclysm” on the Moon 4 billion years ago struck it at much higher speeds than those that made the most ancient craters. The scientists found evidence supporting this scenario by examining the history of crater formation on the Moon.

During Earth’s earliest days, our planet and others in the inner solar system, including the Moon, experienced repeated impacts from debris that formed the building blocks of the planets. Over time, as material was swept up and incorporated into the inner planets, the rate of impacts decreased. Then, roughly 4 billion years ago, a second wave of impacts appears to have taken place, with lunar projectiles hitting at much higher speeds. This increase could reflect the origin of the debris, where main belt asteroids were dislodged and sent into the inner solar system by shifts in the orbits of the giant planets.

The team is composed of Simone Marchi, an NLSI postdoctoral fellow, William Bottke, the NLSI Team Lead at Southwest Research Institute, Columbia, Md., David Kring, the NLSI Team Lead at USRA’s Lunar and Planetary Institute in Houston, and Alessandro Morbidelli from the Observatoire de la Cote d’Azur, France. Their research paper, “On the Onset of the Lunar Cataclysm as Recorded in its Ancient Crater Populations,” was recently published in the journal Earth and Planetary Science Letters.

The scientists analyzed digital maps of the lunar surface to learn about its history. Their analysis shows that craters formed near the 860 km diameter Nectaris impact basin were created by projectiles hitting twice as fast as those found on more ancient terrains. This was represented by a subtle shift in crater sizes, with the crater themselves thirty to forty percent larger on average than those found in comparable populations with older craters. The scientists believe this can be best explained by an increase in the velocities of the projectiles that produced the younger craters.

The increase in velocities may indicate a change in the solar system when the craters were created. The analysis supports the “lunar cataclysm” hypothesis that the brief pulse of impacting objects 4 billion years ago was due to gravitational disturbances caused by the reorganization of the giant planets as their orbits changed. Nectaris, a crater close to the Apollo 16 landing site, appears to have recorded the spike in asteroid impacts during the “lunar cataclysm.”

Determining the magnitude and duration of any impact cataclysm and testing that hypothesis is a top science priority for future exploration of the Moon, according to a previously published report by the National Research Council.

When Apollo astronauts gathered rock samples from the Moon, many samples had ages dating back 3.9 to 4 billion years ago, suggesting an enhanced pulse of bombardment. If a bombardment of asteroids hit the Moon as theorized, there could be indicators left on the lunar surface that would help validate the theory. Detailed mapping by the United States Geological Survey has previously identified small regions of the lunar surface that might contain clues about the bombardment. The team re-studied those ancient surfaces and measured the sizes of the impact craters using new data obtained from the Lunar Orbiter Laser Altimeter, an instrument on NASA’s Lunar Reconnaissance Orbiter (LRO) currently orbiting around the Moon.

“This is an exciting time for lunar research with LRO and other spacecraft providing so much new data,” said lead author Simone Marchi. “Collaborating with scientists of different disciplines allowed us to link these observational data to dynamical models to put new constraints on solar system history.”

The inferred increase in velocity seems to have occurred after the Moon’s largest impact basin was produced, the 2,500-kilometer-diameter South Pole-Aitken Basin, but before the formation of the largest lava-filled impact basins on the lunar nearside, visible from backyards around the world.

“It is fascinating that the surface of our own Moon records evidence of orbital changes in Jupiter and Saturn that took place so long ago,” said NLSI Director Yvonne Pendleton.