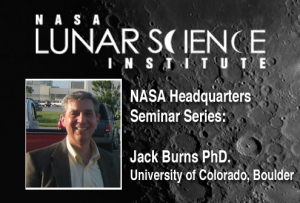 The NLSI’s Lunar University Network for Astrophysics Research (LUNAR) is a team of researchers and students at leading universities, NASA centers, and federal research laboratories undertaking investigations aimed at using the Moon as a platform for space science. LUNAR research includes Lunar Interior Physics & Gravitation using Lunar Laser Ranging (LLR), Low Frequency Cosmology and Astrophysics (LFCA), Planetary Science and the Lunar Ionosphere, Radio Heliophysics and Space Radiation, and Exploration Science. The LUNAR team is exploring technologies that are likely to have a dual purpose, serving both exploration and science.  In this talk, Dr. Burns will describe how LUNAR researchers are using LLR to provide the most precise constraints on General Relativity and gravitation, how low frequency radio observations of the Sun will assist us in understanding and predicting solar radiation that propagates throughout interplanetary space, and how low radio frequency telescopes in lunar orbit and on the lunar farside will allow us to probe the first stars and galaxies during the early Universe’s Cosmic Dawn.  Dr. Burns will also describe our development of new human/robotic mission concepts, including a mission to the Earth-Moon L2 Lagrange Point where astronauts in the Orion spacecraft will teleoperate rovers for geological exploration and deployment of a low radio frequency array.

Jack Burns is a Professor in the Department of Astrophysical and Planetary Sciences and Vice President Emeritus for Academic Affairs and Research for the University of Colorado Boulder.  He is also Director of the NASA Lunar Science Institute’s Lunar University Network for Astrophysics Research (LUNAR), a NASA-funded center. Burns received his B.S. degree, magna cum laude, in Astrophysics from the University of Massachusetts. He was awarded a Ph.D. in Astronomy from Indiana University.  From 2001 through 2005, Burns served as Vice President for Academic Affairs & Research for the University of Colorado System.  Burns was Vice Provost for Research at the University of Missouri – Columbia from 1997 through 2001. He was Associate Dean for the College of Arts and Sciences at New Mexico State University (NMSU). Burns was Department Head and Professor in the Department of Astronomy at NMSU from 1989 until 1996. During his tenure at the University of New Mexico from 1980 to 1989, Burns served as the Director of the Institute for Astrophysics and was a Presidential Fellow.  He was a postdoctoral fellow at the National Radio Astronomy Observatory from 1978 to 1980.  Burns has over 380 publications in refereed journals, books, and in conference proceedings and abstracts (as listed in NASA’s Astrophysics Data System).  Burns is an elected Fellow of the American Physical Society and the American Association for the Advancement of Science.  He received NASA’s Exceptional Public Service Medal in 2010 for his service on the NASA Advisory Council (NAC) and as Chair of the NAC Science Committee.