Asteroids May Have Delivered Magnetic Material to the Moon 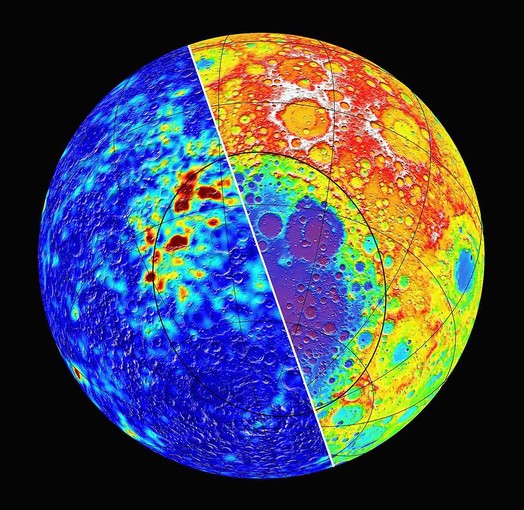 The moon’s largest grouping of magnetic anomalies, on the left, is near the northern rim of the South Pole-Aitken basin, which scientists believe was created by the impact of a massive asteroid about 4.5 billion years ago. Credit: Science/AAAS

After running sophisticated computer models, a trio of researchers believe a giant crater at the moon’s south pole may hold the answer to a long-standing mystery about why portions of the lunar crust have a magnetic field and other parts don’t. Mysterious magnetic material detected on the surface may have been delivered by a 120-mile-wide asteroid that crashed into the moon about 4.5 billion years ago leaving behind a gaping hole on the far side of the moon that is one of the largest-known impact craters in the solar system.

The South Pole-Aitken basin is “this huge, whopping crater that’s roughly half the size of the U.S.,” said Mark Wieczorek, a planetary scientist at the Paris Institute for Global Physics who is also the lead author of the paper published in Friday’s edition of the journal Science. The presence of magnetized patches near its northern rim led Wieczorek and his colleagues to think there might be a connection.

Researchers have wondered about the moon’s regions of strongly magnetized rock ever since the Apollo 12 crew discovered them in 1969, said Wieczorek. Typical moon rocks have a low iron content, which means that they don’t have great potential to become magnetized in the first place. The magnetic anomalies didn’t seem to correlate with any geologic structures that might hold clues about their origins — features such as craters, volcanoes or lava flows.

But as spacecraft gathered more data on the South Pole-Aitken basin, Wieczorek and colleagues Benjamin Weiss and Sarah Stewart, both of Harvard University, began to think that the 1,200-mile-wide basin might be involved.

The formation is slightly elliptical in shape, suggesting that it was created by an oblique impact from a very large object. The most likely candidate would be an asteroid, which can be 10% to 30% metallic iron by weight and about 100 times more magnetic than typical lunar materials, Wieczorek said.

A powerful, angled hit would have sprayed iron material downrange from the impact — corresponding, potentially, to where strong magnetic anomalies had been mapped.

If the moon did have a magnetic field at the time of the impact 4.5 billion years ago — a distinct possibility, Wieczorek said — then the metallic debris could have been magnetized as it cooled, leading to the puzzling arrangement of magnetic regions that exists today.

The team tested the theory by running computer simulations of impacts. Varying a number of parameters, including the velocity and impact angle of the asteroid as well as its composition and size, they determined that the scenario that best fit the observations was an asteroid hitting the moon at a 45-degree angle while traveling about 9 miles per second.

Such an impact would have been normal, Wieczorek said. “We don’t require improbable conditions.”

The team’s hypothesis could help researchers get to the bottom of the lunar magnetism mystery.

“I think it’s a good idea. I’m surprised no one really explored it earlier,” said Ian Garrick-Bethell, a professor of planetary science at UC Santa Cruz.

The next big problem to solve is how and when a magnetic field developed on the moon. Ultimately, the best way to get to the bottom of it all, Wieczorek said, would be to go back to the moon and collect samples.

END_OF_DOCUMENT_TOKEN_TO_BE_REPLACED

If you weigh 120 pounds, you would weigh only 20 pounds on the moon.