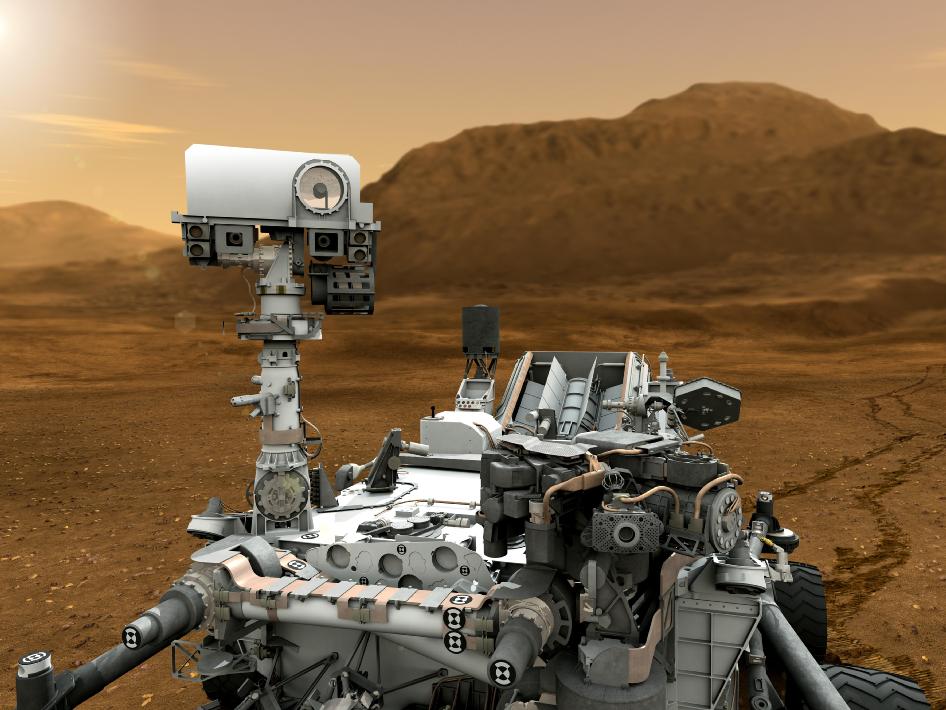 This artist concept features NASA’s Mars Science Laboratory Curiosity rover, a mobile robot for investigating Mars’ past or present ability to sustain microbial life. Curiosity is being tested in preparation for launch in the fall of 2011.

In this picture, the mast, or rover’s “head,” rises to about 2.1 meters (6.9 feet) above ground level, about as tall as a basketball player. This mast supports two remote-sensing instruments: the Mast Camera, or “eyes,” for stereo color viewing of surrounding terrain and material collected by the arm; and, the ChemCam instrument, which is a laser that vaporizes material from rocks up to about 9 meters (30 feet) away and determines what elements the rocks are made of. 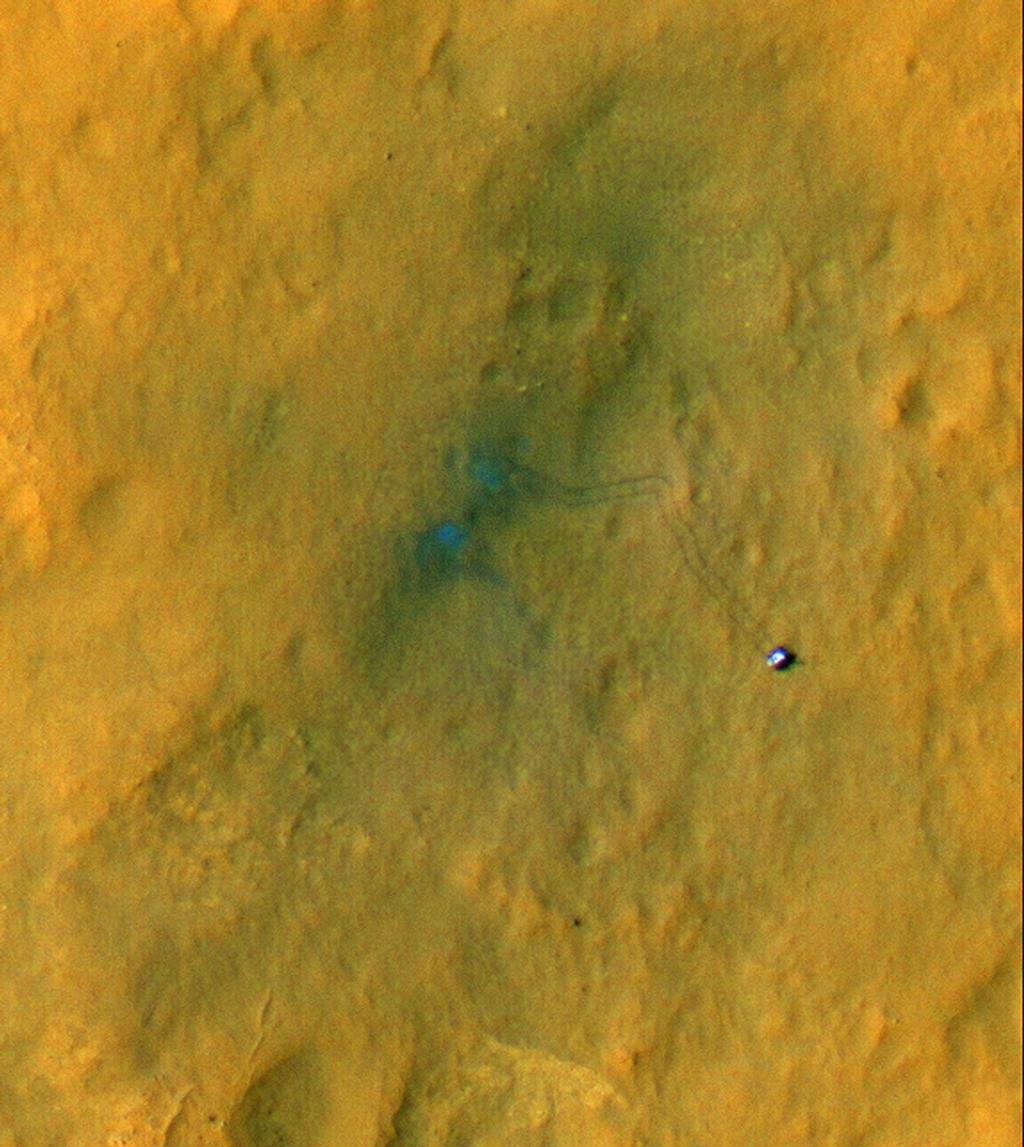 A Rover’s Journey Begins. Image Credit: NASA/JPL-Caltech/Univ. of Arizona
Tracks from the first drives of NASA’s Curiosity rover are visible in this image captured by the High-Resolution Imaging Science Experiment (HiRISE) camera on NASA’s Mars Reconnaissance Orbiter. The rover is seen where the tracks end. The image’s color has been enhanced to show the surface details better.

The two marks seen near the site where the rover landed formed when reddish surface dust was blown away by the rover’s descent stage, revealing darker basaltic sands underneath. Similarly, the tracks appear darker where the rover’s wheels disturbed the top layer of dust.

Observing the tracks over time will provide information on how the surface changes as dust is deposited and eroded. 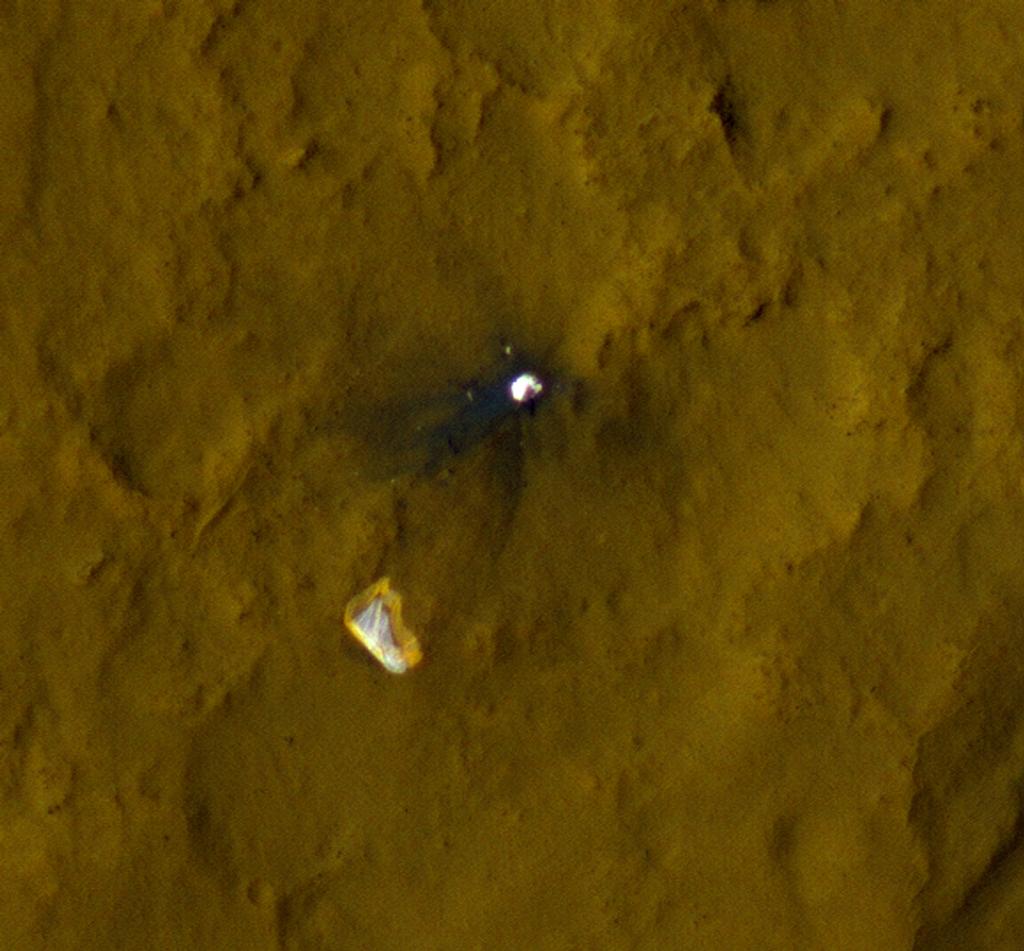 Relics of Rover’s Landing. Image Credit: NASA/JPL-Caltech/Univ. of Arizona
This color view of the parachute and back shell that helped deliver NASA’s Curiosity rover to the surface of the Red Planet was taken by the High-Resolution Imaging Science Experiment (HiRISE) camera on NASA’s Mars Reconnaissance Orbiter. The area where the back shell impacted the surface is darker because lighter-colored material on the surface was kicked up and displaced. 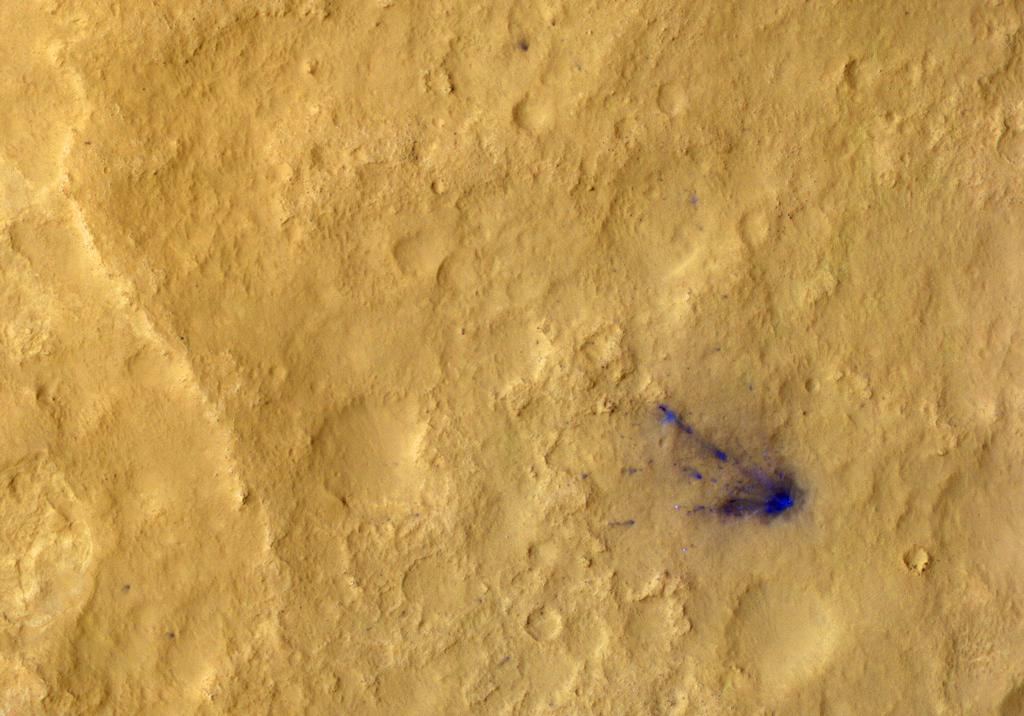 Dissecting the Scene of Sky Crane Crash. Image Credit: NASA/JPL-Caltech/Univ. of Arizona
After a rocket-powered descent stage, also known as the sky crane, delivered NASA’s Curiosity rover to Mars on Aug. 5 PDT (Aug. 6 EDT), 2012, it flew away and fell to the surface. Possible multiple impacts from that collision are revealed in blue in this enhanced-color view taken by the High-Resolution Imaging Science Experiment (HiRISE) camera on NASA’s Mars Reconnaissance Orbiter.

The main crash site is seen at right, shaped like a fan. Farther from the site are several smaller dark spots, which are thought to be secondary impacts from debris that continued to travel outward. The impact sites are darker because the lighter, reddish top layer of soil was disturbed, revealing darker basaltic sands underneath. 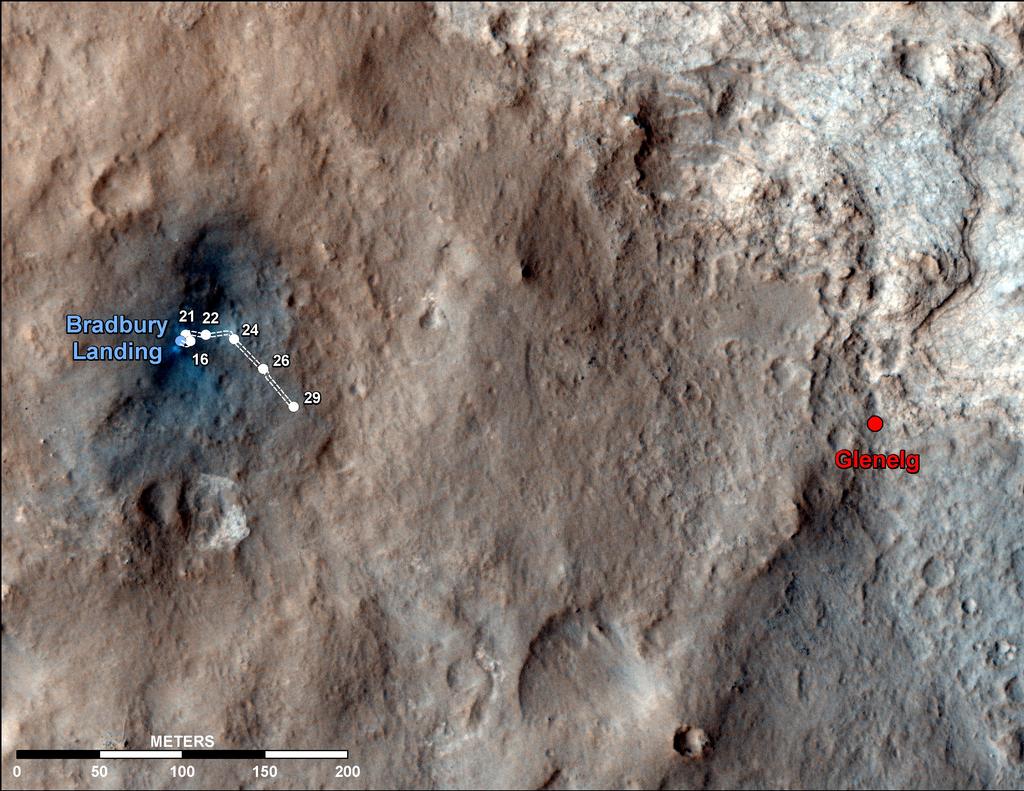 Curiosity Traverse Map Through Sol 29. Image Credit: NASA/JPL-Caltech/Univ. of Arizona
This map shows the route driven by NASA’s Mars rover Curiosity through the 29th Martian day, or sol, of the rover’s mission on Mars (Sept. 4, 2012).

The route starts where the Mars Science Laboratory spacecraft placed the rover, a site subsequently named Bradbury Landing. The line extending toward the right (eastward) from Bradbury Landing is the rover’s path. Numbering of the dots along the line indicate the sol numbers of each drive. North is up. The scale bar is 200 meters (656 feet).

By Sol 29, Curiosity had driven at total of 358 feet (109 meters). At the location reached by the Sol 29 drive, the rover began several sols of arm characterization activities. The Glenelg area farther east is the mission’s first major science destination, selected as likely to offer a good target for Curiosity’s first analysis of powder collected by drilling into a rock.

END_OF_DOCUMENT_TOKEN_TO_BE_REPLACED

The Moon is 4.5 billion years old.