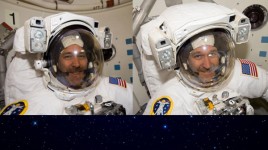 On 4 January, John Grunsfeld, the fix-it-man for the Hubble Space Telescope, became the head of NASA’s Science Mission Directorate. But the former astronaut is quick to point out that he is an astrophysicist too, having done a cosmic-ray experiment for his doctoral thesis on the space shuttle. More recently, while deputy director of the Space Telescope Science Institute in Baltimore, Maryland, Grunsfeld has worked on developing instruments to study the atmospheres of exoplanets.

Budgets are tight and many people are worried about NASA’s future. Why did you take the job during such gloomy times?
From the viewpoint of a space-telescope person — as an astronomer and an astronaut — it is an incredible time because the agency is still formulating its exploration plans for humans. I see no difference between scientific exploration and human exploration. I see a continuum and an opportunity to contribute to the planning of Earth’s future.

As an astronaut who helped to fix the Hubble telescope, you know the human exploration program. How can that help you lead the Science Mission Directorate?

There’s a perspective that I’ve gained as an astronaut that I didn’t get from my science activities. In my science activities, I learned by the seat of my pants. Spending 17 years as an astronaut, I learned the NASA formalism of systems engineering as if my life depended on it. Literally. That perspective is one that I’m bringing to the Science Mission Directorate, and it will help a great deal in things such as executing programs to cost and on schedule.

What do you say to those who might worry about your ability to advocate for Earth science, planetary science and heliophysics?

The most striking thing to me about human space flight and my own personal experience is that I’ve seen dramatic changes on Earth. We humans are rapidly changing the planet. I’ve watched Amazonia as the rainforest has been cut down. That’s something I’ve seen out the window. I’m very worried about that.

The biggest surprise to me is that I never saw any place where I couldn’t see the impact of humans — even the oceans. You can see smoke coming off the east coast of China, smoke and dust, traveling all the way across to the Yukon. These are things that the human eye can see. We ought to try to understand these dynamics in detail.

I see a continuum. The last time I looked, Earth was a planet. Venus is a planet. Mars is a planet. We’re discovering hundreds, thousands, of exoplanets. The Sun is a star; Hubble studies stars. We tend to stovepipe things into budget lines, but there are very few scientists who also don’t see it as a continuum.

Read the rest of the interview at Nature.com.

END_OF_DOCUMENT_TOKEN_TO_BE_REPLACED

Moonquakes have been measured by seismometers emplaced by the Apollo astronauts.