Here at the Lunar Science Institute we appreciate forward thinking, especially when it comes to living sustainably on the Moon, in space, or even here on Earth. Call it “fuel without fossils”– Jonathan Trent is working on a plan to grow new biofuel by farming micro-algae in floating offshore pods that eat wastewater from cities. Hear his team’s bold vision for Project OMEGA (Offshore Membrane Enclosures for Growing Algae) and how it might power the future.

Not only does Jonathan Trent grow algae for biofuel, he wants to do so by cleansing wastewater and trapping carbon dioxide in the process. And it’s all solar-powered! 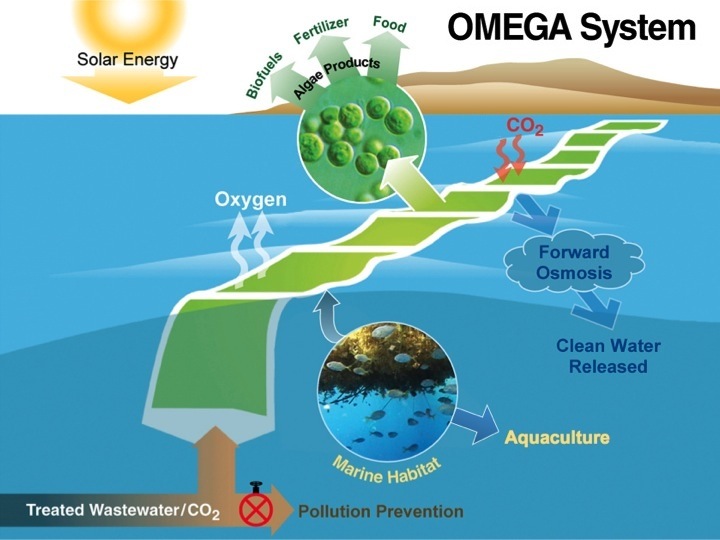 Jonathan Trent works at NASA’s nanotechnology department, where he builds microscopic devices out of proteins from extremophiles — bacteria that live in the world’s harshest environments. It isn’t the logical place to start a biofuel project. But in 2008, after watching enzymes chomp through plant cells, Trent started thinking about biofuels. And, because he has a background in marine biology, he started thinking about algae and the oceans.

Thus was born OMEGA, or the Offshore Membrane Enclosure for Growing Algae. This technology aims at re-using the wastewater of coastal cities that is currently piped out and disposed into the seas. Fueled by the sun and carbon dioxide from the atmosphere, the algae eat the waste and produce oils that can be converted to fuel. Unlike growing corn for ethanol, OMEGA doesn’t threaten the world’s food supply.

The OMEGA system is being investigated by NASA as an alternative way to produce aviation fuels. Potential implications of replacing fossil fuels include reducing the release of green house gases, decreasing ocean acidification, and enhancing national security.