The LRO mission continues to collect observations that are enabling ground-breaking new scientific discoveries about the Moon. As geologists, whenever we look at remotely sensed data collected from another planet, in a sense we are staring back in time. But this is the “deep time” of geology, where we are trying to understand natural processes that (at least on the Moon, anyway) could have happened billions of years ago. But the LRO mission is unique because we can also see human history. Not just any history, either, but one of humanity’s greatest accomplishments, our first steps on another world. Twelve astronauts explored the lunar surface, directly seeing things with their own eyes, making observations, and collecting samples with their own hands. These samples and observations revolutionized our understanding of our solar system. 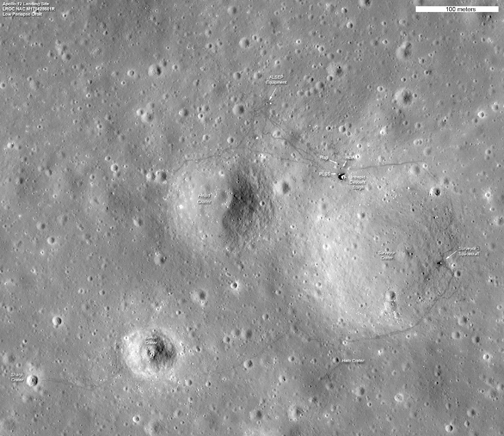 This “snapshot in time” effect is especially evident at the Apollo 12 landing site in Oceanus Procellarum, now known as Statio Cognitum. Here, you can see the remnants of not one, but two missions to the Moon. Astronauts Pete Conrad and Alan Bean demonstrated that a precision lunar landing with the Apollo system was possible, enabling all of the targeted landings that followed. Bean and Conrad collected rock samples and made field observations, which resulted in key discoveries about lunar geology. They also collected and returned components from the nearby US Surveyor 3 spacecraft, which landed at this site almost two and half years previously, providing important information to engineers about the how materials survive in the lunar environment. 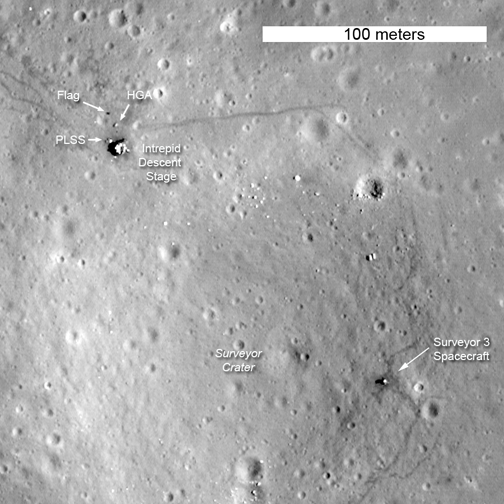 Annotated low altitude LROC NAC image of the Apollo 12 landing site. The informal names of craters visited by the astronauts, the positions of the ALSEP, Intrepid descent stage, and the Surveyor 3 spacecraft are highlighted. Click to enlarge. [NASA/GSFC/Arizona State University].

In the image above, you can see the remnants of the scientific experiments the astronauts set up on the surface, the first long-term Apollo Lunar Surface Experiments Package (ALSEP). Powered by a Radioisotope Thermoelectric Generator (RTG), the ALSEP included a seismometer to record “moonquakes” and several experiments designed to make measurements of the lunar environment, including a Solar Wind Spectrometer, a Cold Cathode Ion Gauge, and a Suprathermal Ion Detector (see if you can find each piece of hardware). The Apollo 12 ALSEP returned data and measurements to Earth for over seven years following the mission and was turned off in September 1977. From the lower altitude you can pick out the shadow of the still standing flag, the High Gain Antenna (HGA), and the discarded Portable Life Support System (PLSS) backpacks.

END_OF_DOCUMENT_TOKEN_TO_BE_REPLACED

Moonquakes have been measured by seismometers emplaced by the Apollo astronauts.