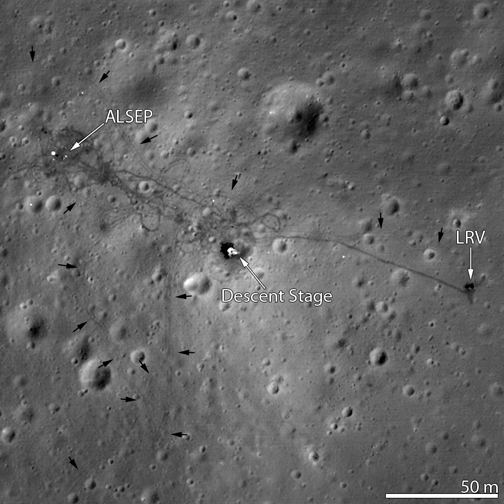 Apollo 15 landing site imaged from an altitude of 25 km allowing an even higher resolution view! The Lunar Roving Vehicle (LRV) is parked to the far right, and the Lunar Module descent stage is in the center, LRV tracks indicated with arrows. Credit: NASA/GSFC/Arizona State University.

The Apollo 15 Lunar Module (LM) Falcon set down on the Hadley plains a mere 2 kilometers from Hadley Rille. The goals: sample the basalts that compose the mare deposit, explore a lunar rille for the first time, and search for ancient crustal rocks. Additionally, Dave Scott and Jim Irwin deployed the third Apollo Lunar Surface Experiments Package (ALSEP) and unveiled the first Lunar Roving Vehicle (LRV). The ALSEP consisted of several experiments that were powered by a Radioisotope Thermoelectric Generator (RTG) and sent back valuable scientific data to the Earth for over six years after the astronauts left. This new LROC NAC image taken from low altitude shows the hardware and tracks in even more detail.

The LRV, a lunar “dune buggy”, allowed the astronauts to traverse far from the LM and explore much more local geology than the astronauts on previous missions (Apollo 11, 12, 14). Not only did the LRV allow the astronauts to move from place-to-place at a lively rate of eight to sixteen kilometers per hour (five to ten miles per hour), but the LRV also allowed brief periods of rest that in turn helped to conserve oxygen. 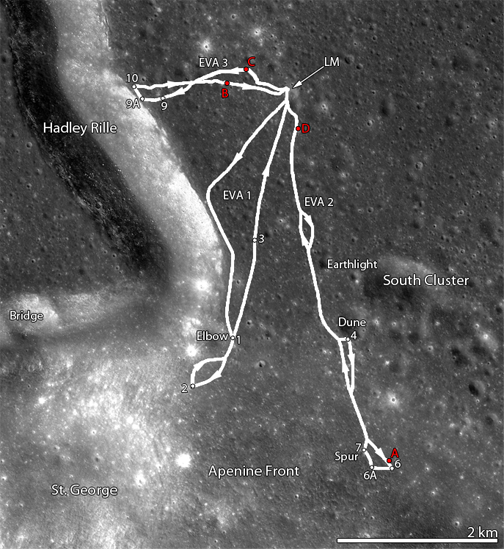 For two one-month periods in 2011, the LRO orbit was lowered such that overflights of the Apollo sites were only 25 to 30 kilometers, rather than the usual 50 kilometers. These low passes resulted in NAC pixel scales near 25 centimeters! LRO has a ground speed of a bit over 1600 meters (5249 feet) per second, and the shortest NAC exposure time is 0.34 millseconds, so images taken from this low altitude are smeared down track a bit. However, the smear is hardly noticeable and features at the Apollo sites definitely come into sharper focus. In this new low-altitude NAC image of the LRV, tracks are visible about half of the time, usually when the tracks are at an angle to the Sun direction, rather than parallel. 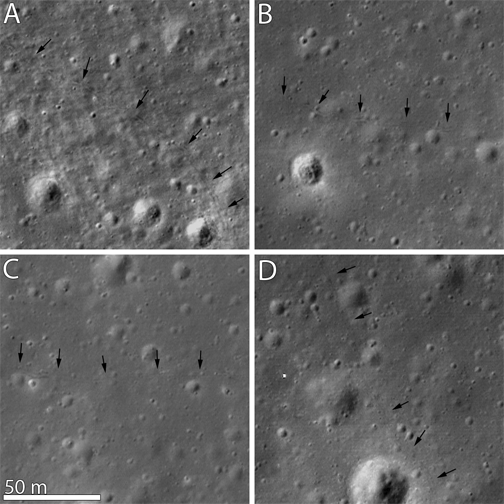 It was during Apollo 15 that the rover was driven on the steepest slopes while exploring the base of a mountain named Hadley Delta. In fact at Station 6a, as Dave Scott stepped off the rover, it started to slide downhill. He was able to grab the rover and stabilize it with no problem. 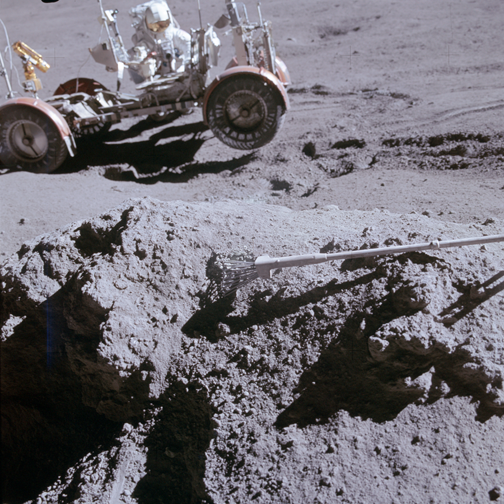 LRV at Station 6a, note that the slope is steep enough that one of the wheels is off the ground. Credit: NASA/JSC.

END_OF_DOCUMENT_TOKEN_TO_BE_REPLACED

There are two high tides and two low tides every day on every ocean beach on Earth, because of the moon's pull.