Research by NASA and international scientists concludes giant asteroids, similar or larger than the one believed to have killed the dinosaurs, hit Earth billions of years ago with more frequency than previously thought.

To cause the dinosaur extinction, the killer asteroid that impacted Earth 65 million years ago would have been almost 6 miles (10 kilometers) in diameter. By studying ancient rocks in Australia and using computer models, researchers estimate that approximately 70 asteroids the same size or larger impacted Earth 1.8 to 3.8 billion years ago. During the same period, approximately four similarly-sized objects hit the moon.

Evidence for these impacts on Earth comes from thin rock layers that contain debris of nearly spherical, sand-sized droplets called spherules. These millimeter-scale clues were formerly molten droplets ejected into space within the huge plumes created by mega-impacts on Earth. The hardened droplets then fell back to Earth, creating thin but widespread sedimentary layers known as spherule beds.
The new findings are published today in the journal Nature.

“The beds speak to an intense period of bombardment of Earth,” said William Bottke principal investigator of the impact study team at the Southwest Research Institute (SwRI) in Boulder, Colo. “Their source long has been a mystery.” 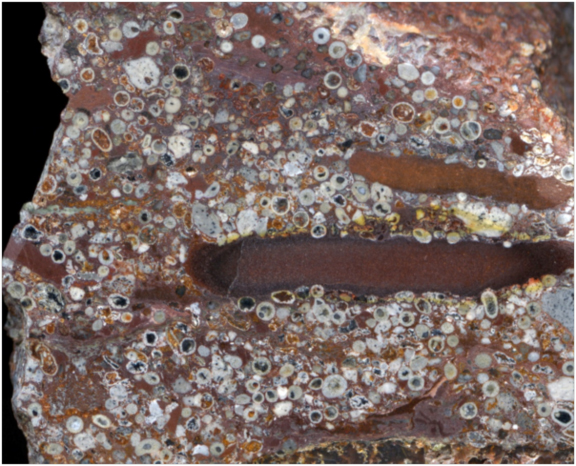 The millimeter-scale circles and irregular gray particles in this sample are formerly molten droplets ejected into space when an asteroid hit the Earth 2.63 billion years ago late in the Archean period. Credit: Bruce Simonson, Oberlin College and Conservatory.

The team’s findings support the theory Jupiter, Saturn, Uranus and Neptune formed in different orbits nearly 4.5 billion years ago, migrating to their current orbits about 4 billion years ago from the interplay of gravitational forces in the young solar system. This event triggered a solar system-wide bombardment of comets and asteroids called the “Late Heavy Bombardment.” In the paper, the team created a model of the ancient main asteroid belt and tracked what would have happened when the orbits of the giant planets changed. They discovered the innermost portion of the belt became destabilized and could have delivered numerous big impacts to Earth and the moon over long time periods.

At least 12 mega-impacts produced spherule beds during the so-called Archean period 2.5 to 3.7 billion years ago, a formative time for life on Earth. Ancient spherule beds are rare finds, rarer than rocks of any other age. Most of the beds have been preserved amid mud deposited on the sea floor below the reach of waves.

The impact believed to have killed the dinosaurs was the only known collision over the past half-billion years that made a spherule layer as deep as those of the Archean period. The relative abundance of the beds supports the hypothesis for many giant asteroid impacts during Earth’s early history.

The frequency of the impacts indicated in the computer models matches the number of spherule beds found in terrains with ages that are well understood. The data also hint at the possibility that the last impacts of the Late Heavy Bombardment on Earth made South Africa’s Vredefort crater and Canada’s Sudbury crater, both of which formed about 2 billion years ago.

“The Archean beds contain enough extraterrestrial material to rule out alternative sources for the spherules, such as volcanoes,” said Bruce Simonson, a geologist from Oberlin College in Oberlin, Ohio.

The research was funded by NLSI and conducted by members or associates of NLSI’s Center of Lunar Origin and Evolution, based at SwRI.

END_OF_DOCUMENT_TOKEN_TO_BE_REPLACED

There are no active volcanoes on the moon.