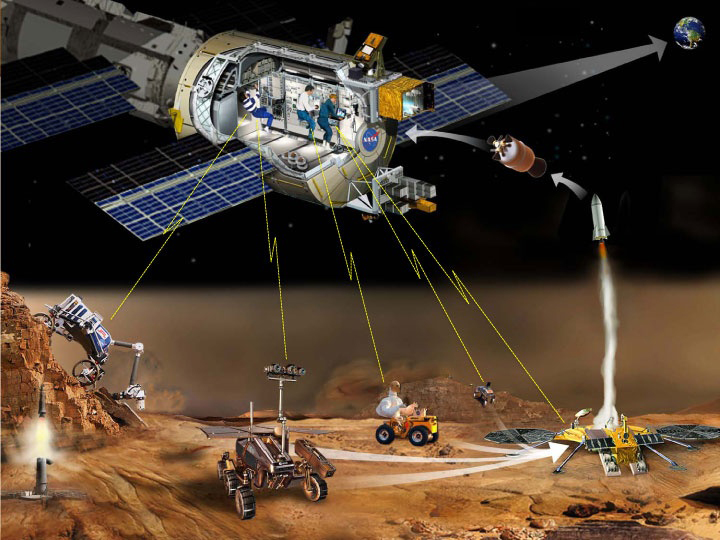 Safely tucked inside orbiting habitat, space explorers use telepresence to operate machinery on Mars, even lobbing a sample of the Red Planet to the outpost for detailed study. This technology could also find use in investigating hellish Venus.
CREDIT: NASA/GSFC

Researchers are considering ways to adopt and adapt telerobotics in outer space. The ability to extend human cognition to the moon, Mars, near-Earth objects and other accessible bodies remotely could curb the challenges, cost and risks of deep-space exploration, some scientists say.

Astronauts, robotics experts and space scientists and engineers discussed such possibilities in the first-of-its-kind Exploration Telerobotics Symposium, held May 2-3 at NASA’s Goddard Space Flight Center. Click here for more information about the Symposium.

You can also read an article on the symposium by Jim Bell, President of The Planetary Society.

The idea is that future space exploration crews could teleoperate systems deployed on planetary bodies from some distance away. Tucked inside a high-tech habitat circling a planet or perched in a module at a Lagrange point, astronauts can use high-quality telepresence to conduct surface operations on other worlds, including scouting out and mining valuable resources.

While landing humans on these surfaces may be an eventual ambition, extending human cognition and dexterity to these locales via telepresence might be achieved on a shorter timescale and at a more modest cost, researchers said.

Establishing on-orbit proximity telerobotic control for the surface of the moon could be a good place to start, with more far-flung destinations perhaps following later.

Read the whole story at Space.com

END_OF_DOCUMENT_TOKEN_TO_BE_REPLACED

The lunar "dust" is made mostly of tiny jagged fragments of volcanic glass.